Oh my, I just ate the best Panini I've had in a looooooong time.  Back up for a minute and I'll tell you how I came about the ingredients and how I think this will be a perfect recipe for Thanksgiving leftovers.

This last weekend my niece was visiting with us and I went to the store and bought a Turkey Breast to cook for dinner on Saturday night, when all I really wanted was all the wonderful fixings that go with it.  When I was talking to my sister-in-law deciding what time and where we were going to meet to do the kid exchange (we live 1-1/2 hours apart) she told me that my brother had just won two turkeys in a shooting tournament and that they were going to cook one on Sunday.  So, me being the smarty that I am (and let's face it, I didn't really want to drive on Sunday, sorry Stacy) I invited them to dinner for Sunday and all they had to bring was the Turkey.  I told Stacy (sister-in-law) that I would do all the cooking and make all the fixings which I had planned on making on Saturday anyway for Sunday's dinner and they could pick up my niece at the same time.  What a deal!  They said sure and brought the Turkey and I made the stuffing, which was out of this world, sweet potato casserole, gravy (the best I've every made) and an apple pie.

So I have a few left overs in the fridge from Sunday's dinner, none being turkey, and some chicken breasts that I roasted last night.  It was lunchtime and I thought why not do a chicken, stuffing, gravy, and Swiss Panini but I had no rolls in the house either, unless you count the ones I've obtained from all the Hawaiian cookie tarts I've eaten in the last two days!  So me being me I decided what can go in between two pieces of bread can also go in a flour tortilla.  And there you have it, the birth of my new favorite Panini.  I hope you'll give it a try, especially with all the leftovers that are coming your way this holiday season. 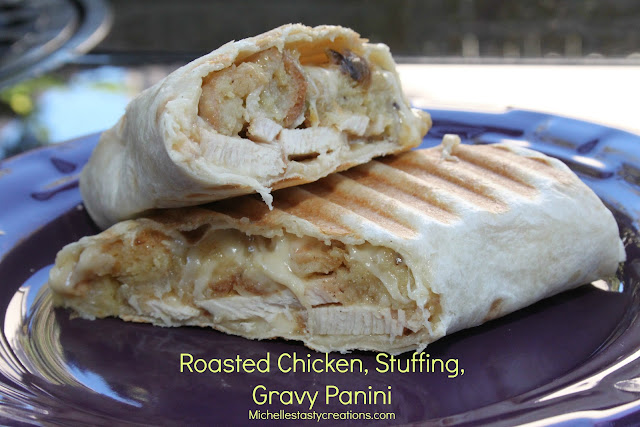 I re-heated in the microwave the stuffing and gravy for about 30 - 45 seconds just to take the chill off.  I never re-heat the meat for a Panini I think it sometimes changes the flavor so I just use it cold.  Pre-heat Panini press to 375 - 400 degrees.  If you don't have a Panini press you can use a hot skillet with another heavy pan on top to make the press.

Heat the tortilla directly on the gas burner for a few seconds, or if you've never done this, you can use a dry skillet or place it in a paper towel and microwave for about 10 seconds.  It just needs to be nice and pliable.
Layer the chicken, then stuffing, then cheese and gravy.  You may use as much or as little as you wish. The amounts I gave are just an approximate.  You could also add any leftover cranberry sauce if you like that too.

Fold both ends in and roll up until it is sealed.

Place seam side down on a pre-heated Panini press or hot skillet.  Close the press and cook for only about 2 - 3 minutes.  If you are using a skillet, place the tortilla seam side down and place another pan on top with something heavy inside to weigh it down.  Usually a 28oz can of anything will do the job.  If using a skillet you will have to turn it over and cook the other side after about 1 -1/2  - 2 minutes.

The Panini will have pretty brown lines when done.  Hello Beautiful yumminess!

Serves - one - who would want to share all this yummy goodness????

Email ThisBlogThis!Share to TwitterShare to FacebookShare to Pinterest
Labels: Sandwiches