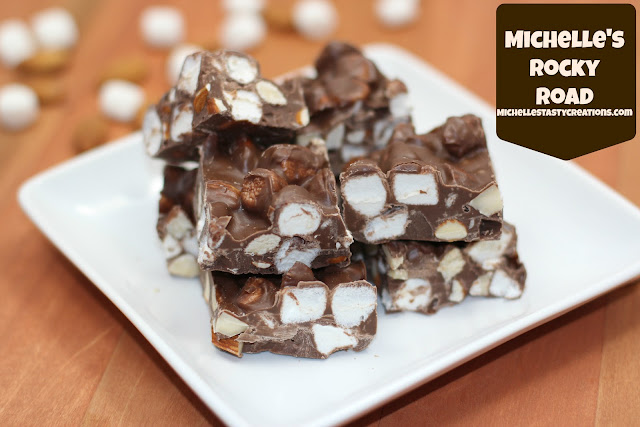 Lately I've been wanting to make chocolate candy "something".  Now, for those of you who know me, this is an extremely weird thing.  I am NOT a chocolate eater.  I love caramel, vanilla, maple, and many other flavors but I usually don't eat chocolate ESPECIALLY if any of the other flavors are around.   But lately I've really been in the mood to make Rocky Road.


So last week I got out my milk chocolate chips, almonds, and mini marshmallows.  I melted the chocolate like I've done a million times before and added all the yummies in and placed it in a pan.  Waited an hour or two then took a look and the whole thing had bloomed!  If you don't know what bloomed chocolate looks like, it is when it gets all chalky looking.  Now mind you, it doesn't effect the taste and is still safe to eat,  it just doesn't look very pretty.

So off to Michaels I went.  To buy the Wilton Candy Melts because I knew those would work fine.  So after another batch of melting and adding, I produced an amazing little square of Rocky Road and here is what I made.

Line a 8 x 8 dish with parchment or tin foil.  I cut two pieces and crossed them so that all sides were covered and left a couple of inches overhang.

In the top of a double boiler, or a bowl set over a simmering pan of water (Do not let water touch bottom of bowl, an inch of water in the bottom of the pan is plenty) place the chocolate melts into the bowl and melt the chocolate, stirring occasionally.

While the chocolate is melting, cut the almonds into halves or thirds.  This is so that it is easier to cut after the candy is set.

Measure 1 cup of almonds, after cutting, then measure out 1 cup of mini marshmallows.  I used a 2 cup measuring cup to do this.

Once chocolate is melted remove bowl from top of pan and add in the yummies.

Stir until the add ins are well coated and pour into parchment lined pan.

First I spread the rocky road around then decided it was too thin so I kinda smooshed it to one side until it was the right thickness; about 1-1/2 inches.

Allow Rocky Road to sit on counter for at least two hours or until completely set. Remove from pan and cut into squares.

I actually ate a small bite and it was super yummy.  The rest was devoured by the kiddos and friends.

You can fine me linking up to these wonderful blogs each week.