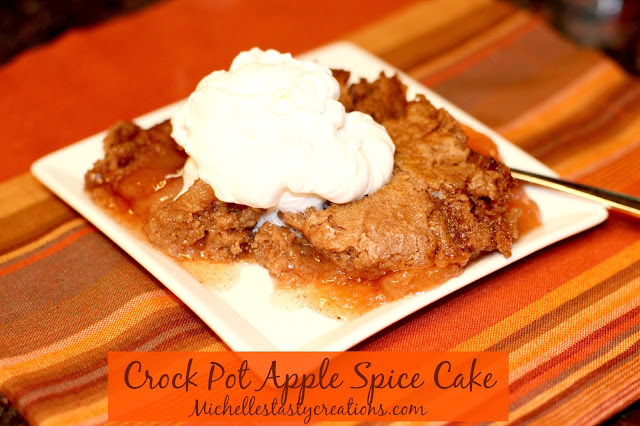 This is literally the easiest and most delicious dessert I've made in my crock pot yet.

I found this new page on Facebook called Tasty and they have some of the easiest recipes out there. This one is adapted from one of Tasty's recipes.

I've made this twice now and both times everyone was blow away by the ingredients (I've NEVER before used canned apple pie filling) and how great it tasted.

So if you are looking for a delicious dessert that just cooks itself while you're preparing and eating dinner go ahead and make this one tonight, you won't be disappointed.

I have also been testing recipes for 2 - 4 people in my smaller crock pot so I have halved this recipe from the original to make a small version.

Dump in the pie filling and sprinkle with cinnamon.

Stir to incorporate the cinnamon and sprinkle evenly with cake mix.

Melt the butter and pour over the cake mix as evenly as possible.

I cooked mine with a paper towel under the lid to prevent the moisture from spilling on the cake. When the cake is done leave in the crock until ready to serve.